The Basics of Warehouse Dock Equipment

The needs for safety, efficiency and detailed data collection are transforming modern docks from mere openings to critical components of an enterprise’s success.

Last year, Modern’s Basics Series explored the functional areas of the warehouse, from receiving to picking and shipping. This year, our Equipment Basics series will focus on equipment segments, beginning with the dock, and followed by conveyors/sortation, automated storage and automatic guided vehicles. In each story, Modern and a group of industry experts will examine the fundamental equipment elements that ensure top performance in the modern warehouse.

Because the standards for performance and safety have changed dramatically in the last decade, “basics” is a relative term. In fact, it might take even less time than that for the descriptions of a modern dock in this article to seem downright old-fashioned. However, for every up-to-date dock there are many, many more that fall short of these basics. Rather than negligence, this is due to the sheer number of docks in use and the rate at which dock technologies have progressed.

Walt Swietlik, director of customer relations and sales support at Rite-Hite, remembers “basic” docks as he found them when he joined Rite-Hite 35 years ago. Above a couple of dock bumpers, a typically small, pull-chain style dock leveler sat below a manual overhead door with a basic enclosure. And, that’s about it. If he just described your dock, you might have work to do.

The overhead door—also push-button operated—is now usually bigger than the trailer, which is locked to the dock by a vehicle restraint as opposed to mere chocks or emergency brakes.

“In the 1980s, the industry was in the infancy of getting the message of dock safety off the ground,” Swietlik says. “Now, there’s no question whether there will be a restraint; the question is which kind. Over a 35-year span, there has been a big evolution in size, shape and capacity, but also in terms of the equipment’s operation and level of complexity.”

The modern dock includes interlocks, a series of mechanical and electronic safety measures that prevent anything but the optimal sequence of events. For example, to open the door, the vehicle restraint must first be positively engaged. To operate the leveler, the door must be open. A food, beverage or pharmaceutical company might design its sequence to minimize infiltration of air, dust or critters.

A facility in hot climates might choose this setup simply to conserve air conditioning. On the other hand, managers might like to leave doors open on occasion to get some fresh air, but interlocks will only allow this once after a physical barrier is engaged to prevent people or equipment from falling off the dock. Swietlik says such a barrier should offer a minimum impact rating of 10,000 pounds at 4 mph.

For those customers concerned with securing access to the back of the trailer, energy efficiency and/or sanitation, dock enclosures may be designed to prevent even a sliver of outdoor light from creeping in. Taking it one step further, the interlock sequence might also include a step where photos or videos are captured to verify security and product condition after transit.

Because dock equipment is increasingly powered by electricity and not elbow grease, the construction of the dock must allow for necessary wiring. Swietlik recommends collaboration between the customer, dock equipment provider and general contractor to ensure all relevant measurements are considered. 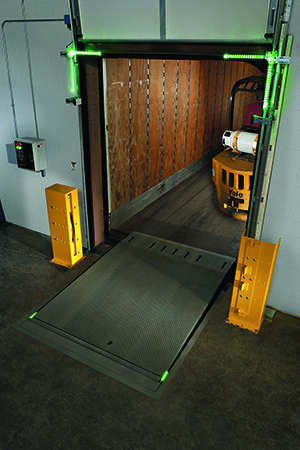 “You want it to look professional when it’s done, so you don’t want conduit sticking out since someone forgot it when they poured the concrete,” Swietlik says. “It’s all very easy to take care of if it’s addressed early.”

Simply ensuring trailer, door and leveler are in place does not ensure a safe dock. Visibility and communication are now critical during loading and unloading. Thanks to a lower profile, LED lights offer illumination without presenting a collision risk for equipment or people. They might also incorporate motion sensors to detect inactivity and automatically shut off after a set time. To further enhance safety, light sensors can detect when a lift truck is backing out of a trailer and automatically dim so as not to blind the operator or the dock attendant as a lift truck reverses toward them.

As an added measure of safety, any kind of motion inside the trailer, whether equipment or pedestrian, will illuminate a blue light on the deck of the dock leveler. If someone is in the trailer doing some paperwork, an equipment operator will know to wait before bringing in the next pallet. Of course, pedestrian safety is important inside and outside the facility. Swietlik says 2017 was another evolutionary year for dock safety, citing advances in the safety capabilities of vehicle restraints.

Instead, the housing of the restraint can incorporate visible and audible alarms to alert anyone who is outside with a shovel, broom or cigarette. Whether or not anyone is there, the alarms will detect an approaching trailer and clear its path.

Too often, installation of safety equipment at the dock follows an incident that compels action. Swietlik notes an increase in the number of customers who are taking a more proactive approach.

“Some people want to think there’s nothing much going on at the dock, whether in terms of safety risks or new products that can reduce them,” Swietlik says. “But things do happen, and people are aware and concerned. We all have to do all we can to minimize the risks.”

An effective management of dock data starts on the inbound side with supplier management. This is not necessarily an equipment or technology issue, he says, but it’s something that impacts the value a customer can derive from technology.

“If everything is adequately and clearly labeled in such a way that with a single scan can capture all information about the product, dock operations will be more efficient,” Wheeler says. “Supplier management is always something that can be done better.”

The GS1 bar code standard is a key tool toward the goal of improved supplier management and dock efficiency. By standardizing the way virtually any data field is encoded, these labels enable the quick exchange of critical information, like lot, expiration date, country of origin, catch weight and more.

“In the past, if you wanted to do supplier management, it used to involve creation of elaborate routing guides,” Wheeler says. “You’d present the supplier with the specs for a label and all relevant data fields, and in some environments this makes sense, but for many others it’s a very onerous set of requirements to put on your supplier.”

With standardized labeling in place, it then falls to dock hardware and software to effectively capture the labels’ data. Whether a linear code or multiple bar codes, a scanner paired with the right software can read multiple codes in one scan. Rugged headland devices are common in the receiving and sorting of inbound goods for putaway. It’s a workflow that has a lot of variability, Wheeler says, including damaged or noncompliant product, and is often the one area where warehouse management system (WMS) transactions aren’t always repetitive.

Handhelds with plenty of screen real estate offer the option to present more data and communicate more clearly to dock attendants, who might like to call up an item master or other order information on the fly. These devices might also be equipped with extended range scanning or a camera to document damaged product and file a claim right on the device. The majority of operations do some label printing for putaway, using a range of stationary or mobile tabletop printers, or wearable printers.