This provides technology roadmaps and twenty-year market forecasts, in unit numbers and revenue, for all the technologies outlined above (13 forecast lines). It also built a twenty-year model because our technology roadmap suggests that these changes will take place over long timescales. In this detailed forecasts it clearly explains the different stages of market growth and outline the key assumptions/conditions as well as data points that underpin our model.

It further provide investment/trend analysis, always seeking to put each technology within its greater quantitative as well as qualitative context. It also include company interviews/profiles/reviews. Company profiles and interviews provide valuable insight on company positioning, strategy, opportunities, and challenges 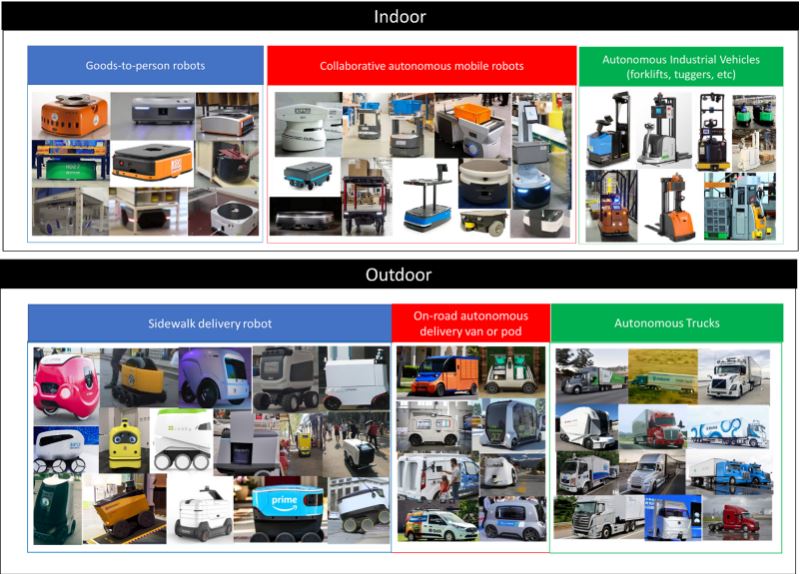 These show pictures of products and prototypes of various mobile robots and ground-based autonomous vehicles aimed at automating a part of the warehousing and delivery chain. These technologies- together with delivery drones- are examined in detail in this report.

For a long time, automated guide carts and vehicles (AGC and AGV) have been in use. They are infrastructure dependent, meaning that they follow a fixed infrastructure, such as conductive wire or magnetic tape, in going from A to B. They are reliable and trusted to handle all manner of payloads. Their installation is however time-consuming, and their workflow is difficult to adapt.

Consequently, as a technology, they are on shaky ground, unless they adapt. This is because the technology is evolving towards more autonomous and infrastructure-independent navigation. It forecast that they will tend towards obsolescence and increasingly become confined to ever narrower market niches. Overall, it predict that their market will shrink by 50% in 2030 compared to the 2019 level.

A bright spot for automated robots

One very bright spot for automated robots is in goods-to-person automation within fulfilment centres. Special robot-only zones are created within warehouses in which these robot fleets move racks at high speeds to a manned picking station. The productivity gains are clear and proven.

This is a fast-growing market space. The landscape was set on fire when Amazon acquired Kiva Systems for $775M in 2012, thereby leaving a gap on the market. Today, significant well-funded alternatives such as GeekPlus (389$M), GreyOrange (170$M), and HIK Vision ($6Bn revenue) have emerged, achieving promising and growing deployment figures. The number of start-ups has also increased, especially between 2015-2017.

It forecast the annual unit sales to double within 6 years. Despite the large deployments already, the real global inflection point is to arrive around 2024. Indeed, the report forecasts that between 2020 and 2030, more than 1 million such robots will be sold accumulatively. 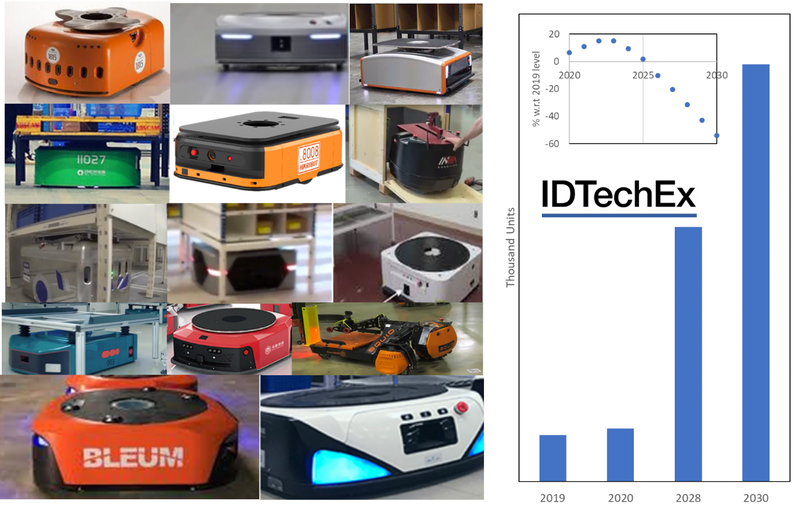 The images on the left show various examples of goods-to-person robots. The forecast figure on the right shows the near-term forecast for these goods-to-person robots. The projections in the report extend until 2040. The forecast model considers the rate of growth of the addressable market by considering the growth in fulfilment centres, the size of these centres, and the number of robots deployed per area. The inset shows the decline of the traditional infrastructure dependent automated guided carts. The figure shows the rate of change w.r.t to the value in 2019.

Towards autonomous indoor robots and vehicles

The navigation technology is transitioning from automated to autonomous. The primary benefit is that the navigation becomes infrastructure independent, allowing the workflow to be easily modified and enabling various modes of collaborative workflows between robots and humans.

The technology is enabled by better SLAM algorithms. The algorithms- based on different sensors including stereo camera and 2D lidars- are evolved enough to handle safe autonomous navigation within many structured indoor environments. These robots are easy to install and to train.

The technology options are still many. A common approach is to use 2D lidars to develop a map of the facilities during the training phase, e.g., walking the robot around the facilities. The fixed reference objects will be marked during the set-up phase. Another approach is to use camera vision and deep learning to also identify and classify objects. This is computationally more complex, but will enable a more flexible system that can have more intelligent decision making in complex and changing environments.

The business models are also various and evolving. Some are offering their technology as RaaS (robot as a service). Others are following a traditional model of equipment sales. Even these suppliers will also need to build in a subscription platform into their business model to offer maintenance and upgrades, especially cloud-based software updates.

It assess that the market for such autonomous mobile robots (AMRs) will grow. There have also been prominent investments and acquisitions this year, e.g., by Shopify and Amazon. Overall, we forecast that more than 200k robots could be sold within the 2020-2030 period (this figure includes those that can perform picking of regularly or irregularly shaped items).