Skip to content
Blog » Do more robots mean a safer warehouse?
Previous Next

Fulfillment robotics pledge to make workers’ jobs easier, but whether those jobs are safer is open for debate — even among those making and selling the technology.

The notion that warehouse automation will bring about an immediate thunderclap of job losses is largely debunked. But a question quickly replacing the one of mass layoffs is how will automation, specifically robotics, change the nature of warehouse work?

In addition to increasing fulfillment speed and picking accuracy, many robotics vendors claim robots also make workers’ tasks more ergonomic and less repetitive. But, recent media reports regarding the frequency of reported injuries at Amazon facilities, and especially Amazon Robotics facilities, suggest robotics and worker welfare are not as correlated as early adopters may have hoped. A Reveal investigation published in December found injury rates at 23 Amazon facilities were more than double the national average for warehouse work. Amazon said the injury rates were elevated due to adamant reporting.

Leaders in the warehouse robotics space, who generally sell robotics or fulfillment as a service, have differing viewpoints on whether more robotics means a safer warehouse — and what elements make for a safer system.

Robotics essential to picking and packing come in two main forms — collaborative systems and non-collaborative systems. The more commonly used today is the non-collaborative type wherein robots move goods around a warehouse to allow human pickers and packers to remain stationary. Many of the robotic technologies within this set of tasks currently in use in warehouses require little physical interaction with workers apart from repairs or malfunctions.

Amazon Robotics technology is one such system. Chunky, square robots (called drives) carry shelves of products around a chain-link cage using QR codes on the floor for navigation. The shelves are loaded and unloaded based on order demand by workers stationed on the outer perimeter of the cage who feed packed totes onto conveyors that traverse the warehouse. 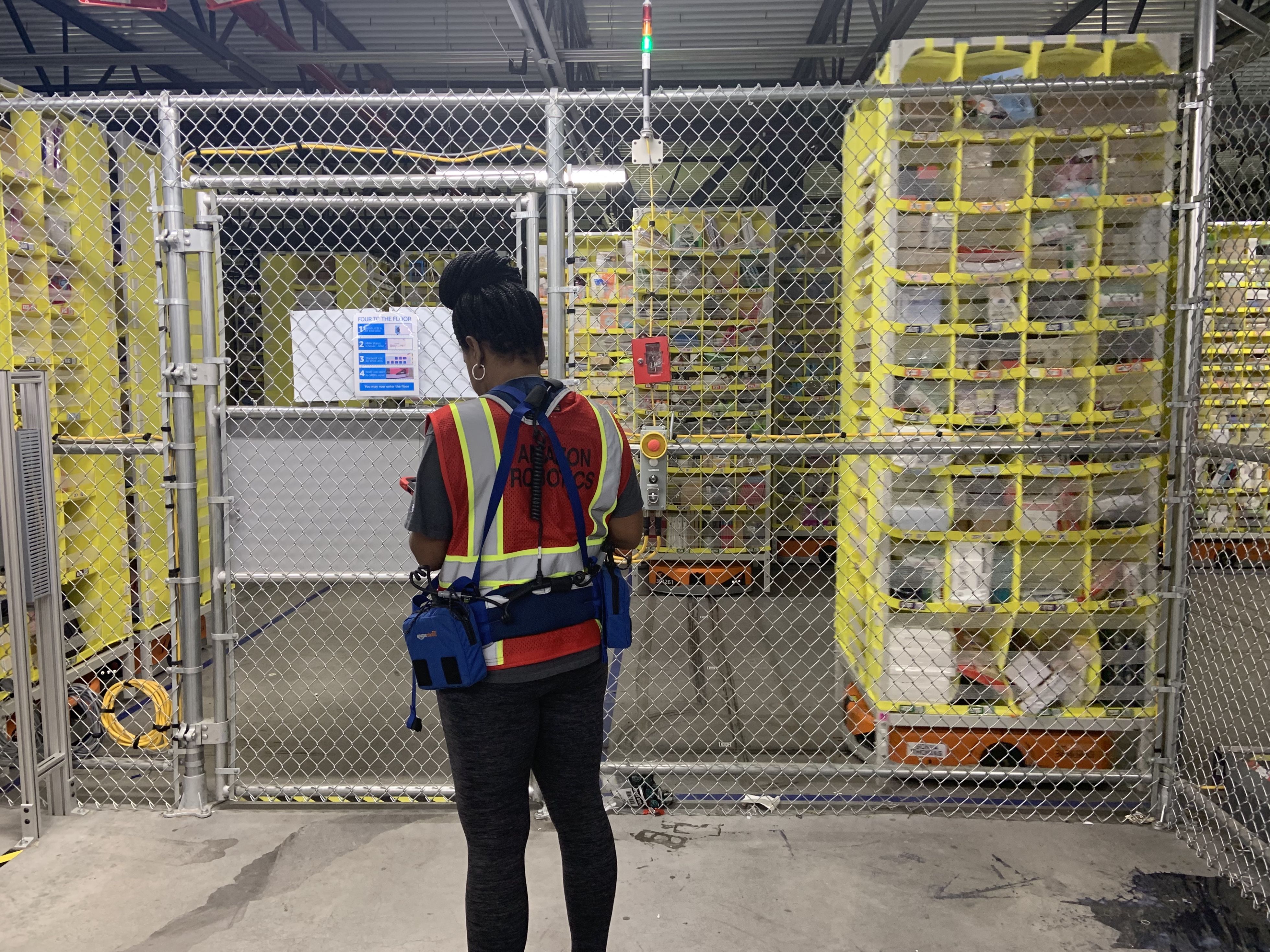 And Amazon isn’t the only system in which robotics and humans interact minimally. Geek+, which launched in the U.S. in February. and Fabric are two examples of contained robotic systems that humans load and unload from the periphery.

Fabric Chief Commercial Officer Steven Hornyak told Supply Chain Dive it’s this very separation that makes Fabric’s system safe. Since the robotics are caged and only need human interference for maintenance when the system is down, the possibility of an adverse interaction is extremely low, he said.

Fabric’s robotic micro-fulfillment “cubes” look somewhat like a steel jungle gym through which totes travel via lifting robots and rolling robots as orders are built. Humans do some picking, but Fabric is also working on integrating robotic picking so humans will only handle oddly shaped or perishable items. 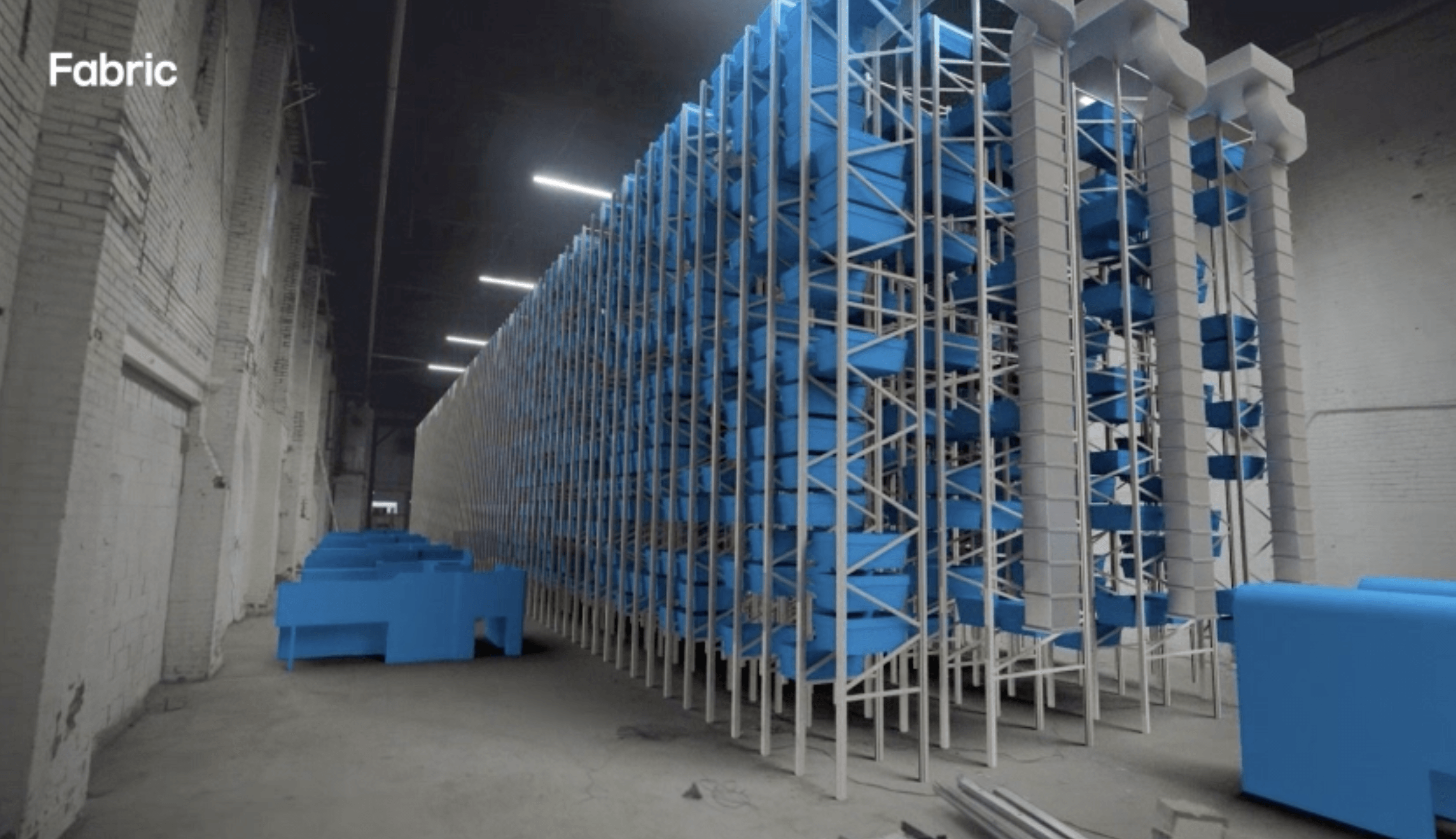 But not all industry leaders agree on what makes a robotic fulfillment system safe.

The system Faulk now champions is on the other end of the robotics spectrum. In Locus Robotics’ system, free-wandering robots about the size of a Segway scooter with a screen at the top instruct human workers on what to pick and where. Workers, who wear a bluetooth tag so the system can identify them, then pick items and load them onto the robot. 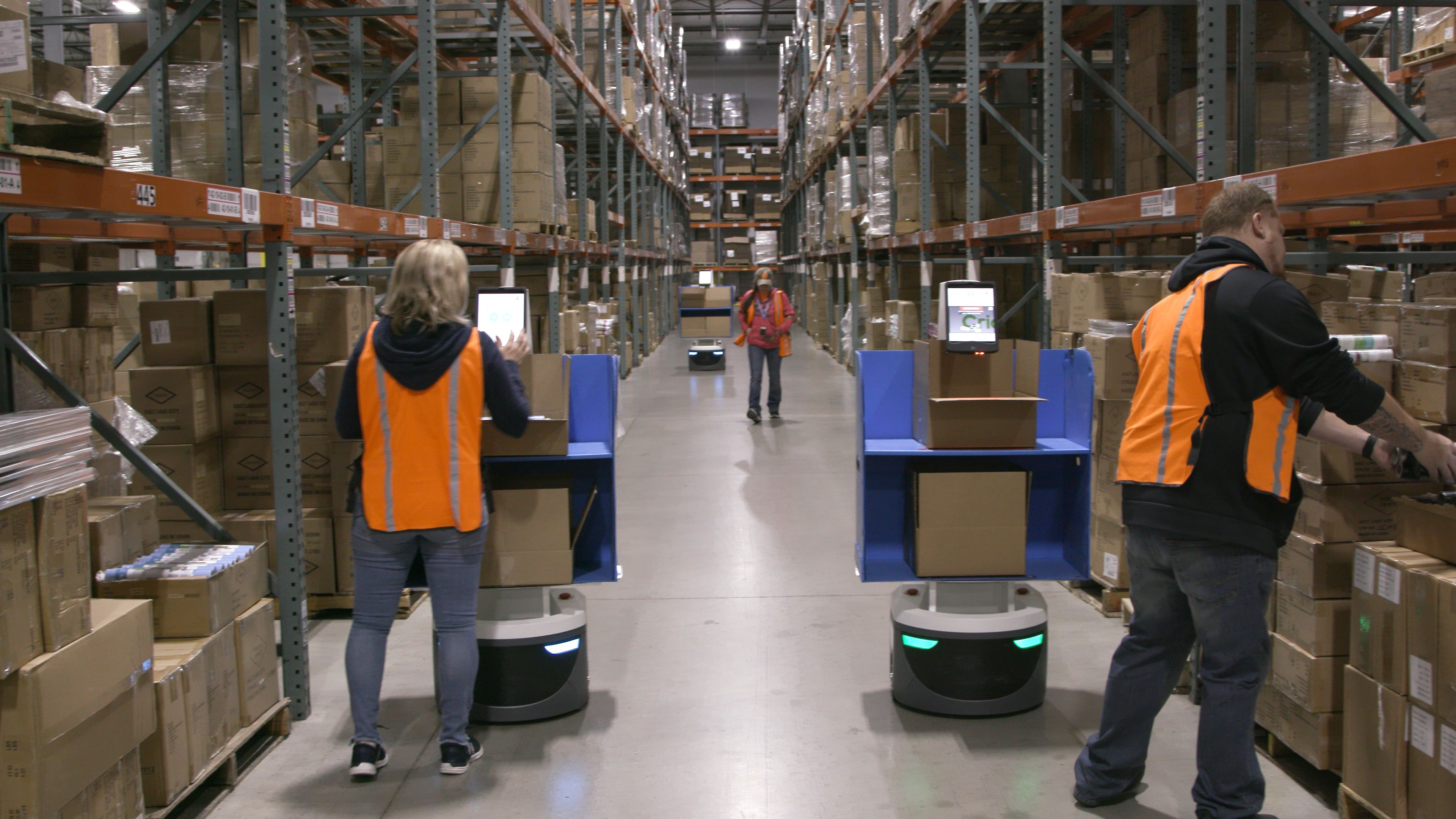 “It’s a caged thing,” he said of Amazon’s system. “The robots travel around and then they bring shelving units that could weigh over 1000 pounds to a human. And if a human literally walks out on the floor they will end up in a hospital,” Faulk said.

He conceded that Amazon has in place several fail-safes to avoid collisions with workers, but since the robots are designed to stay behind the fenced borders, they are inherently not collaborative, said Faulk.

Amazon did not respond to a request for comment on the issue of safety and collaborative versus non-collaborative robotics in time for publication.

Beyond safety from robots, the harder question at the heart of the current robotic debate is, does the speed and efficiency gained by applying robotics to the warehouse then oblige humans to speed up too?

“So if a [human worker] doesn’t keep up, it’s not like the ‘I Love Lucy’ line where you’ve got work building up and things going past you.”

“So if a [human worker] doesn’t keep up, it’s not like the ‘I Love Lucy’ line where you’ve got work building up and things going past you,” said Jentoft. Most robots interact with humans at the beginning and end of the robot’s workflow — humans provide what robots need to complete a task and they offload the finished work such as a packed order or box. Feed the robotic process too slowly, and the robot will simply work below its potential. 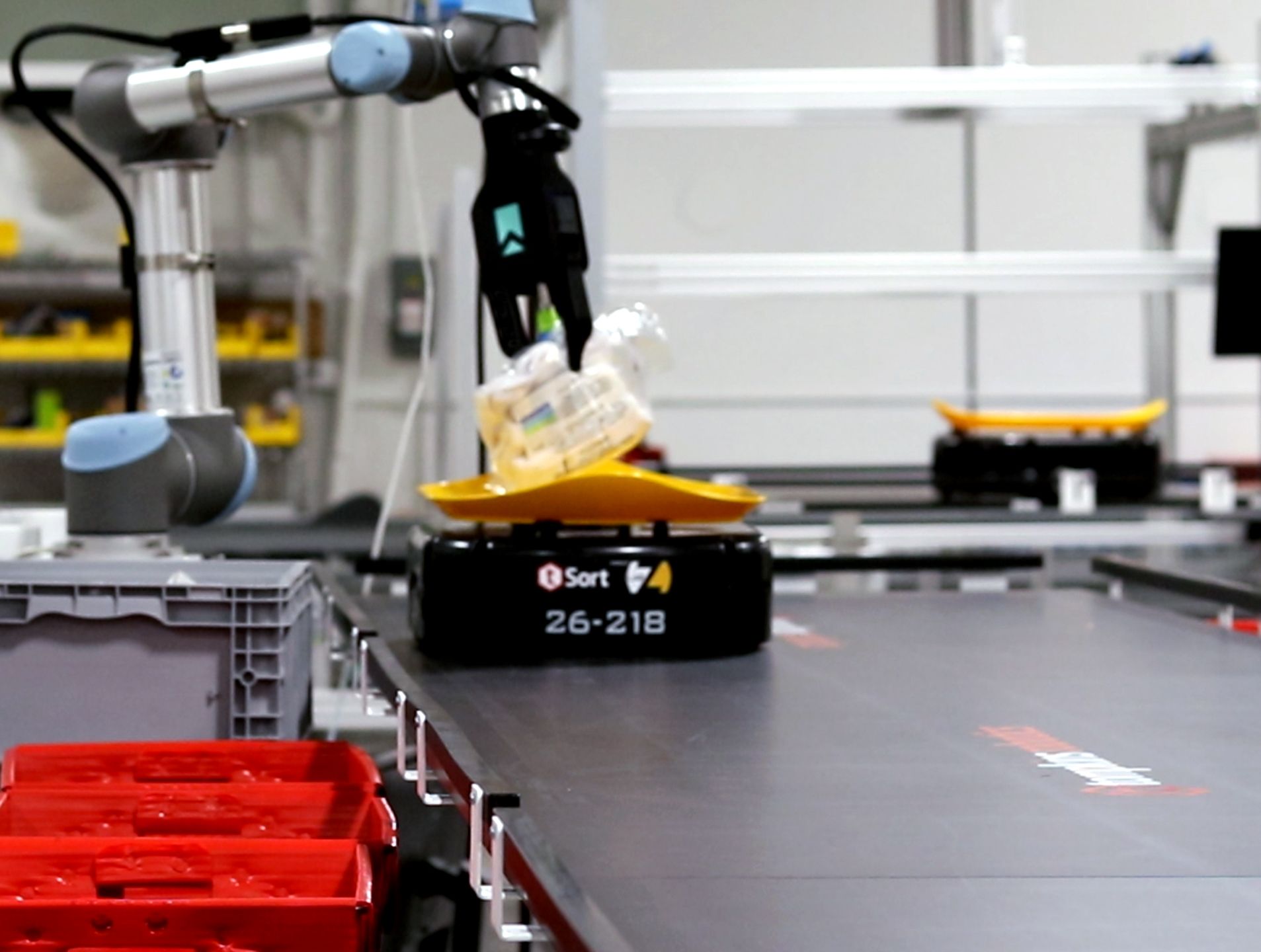 “In any managed system, management has the ability to drive performance to a specific target. That’s the case if it’s a robotic warehouse or if it’s a manual warehouse,” said Jentoft. “You can’t use it to force faster operations on the people.”

Jentoft laid out two paths for warehouse automation: one that asks humans to speed up to the pace required for one-day fulfillment, where human tasks become “narrower and less pleasant.” This scenario is what Reveal’s reporting claims — along with a pace that results in more injuries.

But no matter the method, the strain or lack thereof on workers comes down to priorities, explains an October report by researchers Beth Gutelius and Nik Theodore, published by the UC Berkeley Labor Center.

An operation’s highest priority will win out agnostic of technology, write the researchers. And for most e-commerce operations, that priority is speed. Warehouse jobs, therefore, are likely to gain in intensity as a result of automation and robotics — especially in human picking scenarios — the researchers conclude.

Elements of “intensity” the researchers called out include a lack of coworker interaction (since instructions are more often given by machine) and “micromanagement of work tasks at an unprecedented scale.” (This micromanagement encompasses tracking of productivity by the minute and even gamification efforts and the psychological results of constant monitoring.)

“Our research suggests that even though some technologies could alleviate the most arduous tasks of warehouse work (such as heavy lifting), this likely will be coupled with attempts to increase the workload and pace of work, with new methods of monitoring workers,” reads the report.

Industry disagreement as to the necessary fail-safes and safest strategies offer support for the theory that, with robotics, it’s in the way you use it.